DISTRIBUTIONAND DIVERSITY OF MACRO ALGAE COMMUNITIES IN THE AMBON BAY

Water conditions affected by natural and anthropogenic parameters such as sedimentation and solid waste disposal can influence the growth and distribution of macro algae. Sustainable management efforts can reduce damage on the Gulf coast of Ambon due to human activities and land clearing. This study was conducted in October 2008 using the transect method with 3 replicates in five locations i.e., Tantui, Air Salobar, Hative Besar, Halong, and Lateri. The interior and exterior waters of Ambon Bay contained different habitat conditions due to  sedimentation processes. The purpose of this study was to determine the distribution and diversity of macro algae communities in the Ambon Bay. The results found 21 species of macro- algae consisting of 10 species of Rhodhophyceae, 6 species of Chlorophyceae, and 5 species of Phaeophyceae. The highest density value of seaweed in Tantui was 389.0 g/m² of Chlorophyceae of Halimeda genus. In Air Salobar and Halong, the highest density value was Rhodophyceae of Gracilaria genus of 172.0 g/m² and 155.0 g/m², respectively. For the other genus in the Tantui and Lateri regions were dominated by Ulva at 92.10 gr/m2 and Padina of 20.0 gr/m2, respectively. The highest dominance of macro algae in the Hative Besar was found Chlorophyceae of Halimeda genus of 2.93 %, in the Air Salobar of Phaeophyceae of Turbinaria genus of 1.43 %. The difference values in density and the dominance of macro algae indicated an influence of habitat and environment due to seasons, sediment, and solid waste disposal to the diversity of macro algae. 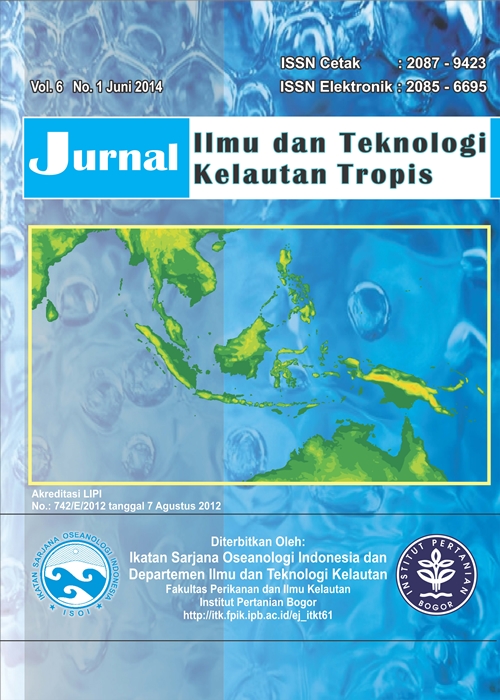