Effect of CaCl2 soaking and edible film coating to delay or inhibit chilling injury of freshly-cut jackfruit has been studied. The onset of chilling injury was monitored based on sadden increase of ethylene emission as measured on-line using CO2-laser driven photoacoustic spectrometer.Freshly cut edible part of ripe jackfruit was used as the research material. The fruit was soaked in 0%, 1%, 1,5%, 2%  of CaCl2  for 15 minutes. After rinsing, sample were divided into two parts each for edible coating and control. The edible film was prepared by soaking of the samples for 30 seconds in solution of white bean (Phaseolus lunatus, L.) edible coating, which was derived from our previous research. The samples were devided into two parts for destructive and non destructive analysis. Both were then stored at 4oC for 3 days, at which time the normal fruit suffer from chilling injury. For the non-destructive analysis, the samples were individually put in special cuvet and a flow-trough air system was connected to each cuvet for on-line ethylene monitoring. Data of real-time ethylene emission were collected  automatically every 120 minutes during the three day cold storage. The other set of samples were put in a plascic bag and stored at 4oC for 3 days period. At the end of cold stored, the samples were let to adjust to room temperature for 1 hr before subjected to respiration rate, reducing sugars, total acidity, and texture analysis.Result indicated that soaking with CaCl2 and edible film coating of freshly-cut jackfruit  delayed the on-set of chilling injury as indicated by late increase of ethylene emission. Based on pattern of ethylene emission  during the three day storage and their respiration rate, the best treatment to delay chilling injury of fresly-cut jackfruit was soaking in CaCl2 2%  in combination with edible film coating. 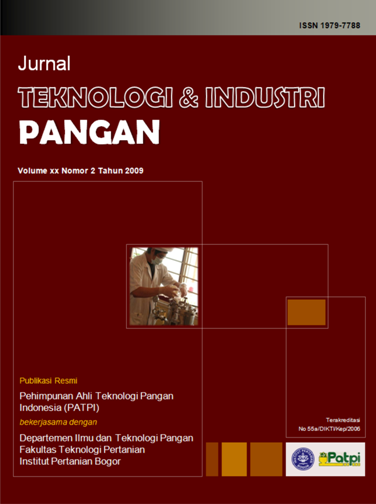