Until recently, commercial banks are not interested in providing fund for community-based forest plantations development. Due to that, Ministry of Forestry has been  implementing program providing financial access for
community forest plantation (HTR) development through revolving fund scheme (PDB-HTR). During 1997 – 2000 Ministry of Forestry had also developed a similar credit scheme called credit for community forest business (KUHR), but its implementation had encountered many problems. This study had compared PDB-HTR scheme and KUHR scheme to get the lessons, so that the implementation of the PDB-HTR will not suffer the same fate with KUHR. The study was carried out using narrative policy analysis approach. Research was conducted in November 2008 to April 2009 in Riau and South Kalimantan Provinces.The results showed that the scheme of PDB-HTR seems has many similarities with the KUHR scheme. From the analysis had been done there are several findings to consider for policy improvements of PDB-HTR namely: the credit scheme and its orientation, on site level organization, application procedure, dissemination/ socialization, and facilitating mechanisms.

Bramasto Nugroho
Departemen Manajemen Hutan, Institut Pertanian Bogor, Jalan Raya Dramaga, Kampus IPB Dramaga, Bogor 16680
How to Cite
Nugroho, B. (1). Analisis Perbandingan Beberapa Skema Pinjaman untuk Pembangunan Hutan Tanaman Berbasis Masyarakat di Indonesia. Jurnal Manajemen Hutan Tropika, 17(2), 79-88. Retrieved from https://journal.ipb.ac.id/index.php/jmht/article/view/3980
Download Citation
Issue
Vol. 17 No. 2 (2011)
Section
Articles
Jurnal Manajemen Hutan Tropika is an open access journal which means that all contents is freely available without charge to the user or his/her institution. Users are allowed to read, download, copy, distribute, print, search, or link to the full texts of the articles in this journal without asking prior permission from the publisher or the author. This is in accordance with the Budapest Open Access Initiative (BOAI) definition of open access. 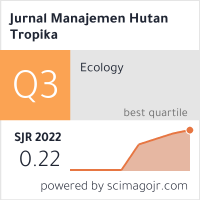