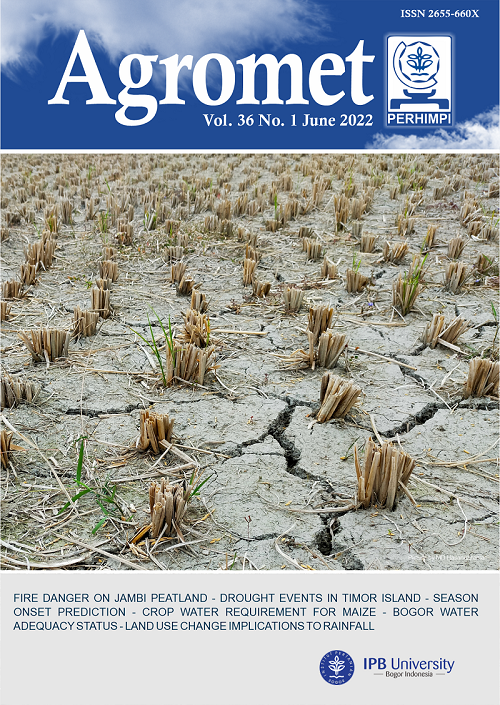 Jambi covers various land uses with different characteristics related to biogeophysical cycle. Land use plays an important role in the atmosphere-surface interaction and energy balance partition, which influenced rainfall pattern. Two proxies widely used to differentiate various land uses are albedo and normalized difference vegetation index (NDVI). However, study on albedo and NDVI relationship with rainfall in Jambi is still limited. This study aims to analyze the correlation of NDVI and albedo with rainfall and their distribution in Jambi and Muaro Jambi in 2013 and 2017. The research used Landsat 8 OLI TIRS satellite image data to derived NDVI and albedo, and CHIRPS data for rainfall. A simple linear regression was used to calculate the correlation of NDVI and albedo with rainfall. The results showed that the distribution of albedo for each land use class from the lowest to the highest was forest, plantation, cropland, shrubs, and settlements, respectively. On the contrary, the distribution of NDVI and rainfall is the inverse to albedo. Albedo and NDVI had a strong influence on rainfall through surface energy balance partition. This was indicated by the high R-square between albedo and rainfall (0.99) and between NDVI and rainfall (0.97). Increasing upward latent heat flux from the land surface to atmosphere leads to a rainfall increase. In other words, rainfall may also increase with the decrease in albedo, increase in NDVI, or land use change.