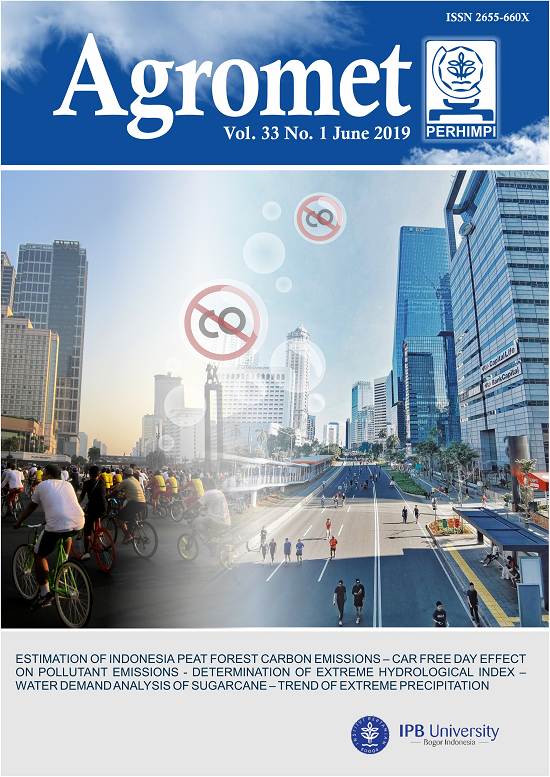 The study of climate change on hydrological response is a crucial as climate change impact will drive the change in hydrological regimes of river. Upper Ciliwung watershed is one of the critical rivers in Java Island, which has been affected by climate change. This study aims to: (i) simulate the discharge flow using the Hydrologiska Byrans Vattenbalansavdelning (HBV) model; (ii) simulate future flow using three general circulation models (GCM) namely Commonwealth Scientific and Industrial Research Organisation (CSIRO) Mk.3.6.0, Model for Interdisciplinary Research on Climate version 5 (MIROC5), and Geophysical Fluid Dynamics Laboratory-Coupled Model generation 3 (GFDL-CM3); (iii) determine the changes of extreme hydrological index during historical period (2001-2015) and projected period (2031-2045). The historical year simulation and projections are used to determine eight hydrologic extreme indices for high flow and low flow. We calibrated the HBV model for two years (2001-2002) and validated it for two years (2003-2004). Our model performed well in discharge simulation as shown by the NSE values (0.66 for calibration and validation). Then we calculated the indices for each period used (historical and projected). To show the changes in hydrological regimes, we compare the indices between two periods. Changes in the index of the two periods tend to decrease in value on the index parameters that characterize the minimum extreme events. Hence, that it is possible in the projected period there will be extreme hydrological events in the form of drought.