In the middle of 1997 Indonesia’s economic was destroyed by a long economy crisis which had influenced the US foreign currency (USD) against Rupiah (IDR). On the other side, Small and Medium Enterprises (SME) still survives and grows absorbing more than 35 million labors active in agriculture sectors. Up to this time, almost 60% of domestic earnings bruto comes from SME commerce and agriculture. SME is expected to expand, from what initially in the form of a small industry unit into a middle industry unit and hereinafter become a big industry unit. Along with the growth of entrepreneurs of SME, the number of absorbed labors also increased equal to 20% per year consisting of small industries 15,9% and middle industries 4,1%. The objective of this research is to analyze the characteristic and behavior of SME having effect on financial pattern, study constraints in giving working capital loan, determining financial pattern according to characteristics of SME, and also compile strategy for BNI in improving market compartment and facing competition in banking industry. Data analysis was done with methods of descriptive qualitative and analysis of strenghts, weaknesses, opportunities and threats (SWOT). According to the responses stated in the questionnaire by the clients of BNI, 84.5% expressed that working capital loan was  proper to SME’s, 82,5% expressed easy access to bank and there was relationship between bank and SME’s important. Meanwhile 77,5% expressed constraints in distribution and application of working capital loan from BNI.According to the analysis of chi square with db = 14, and expected result frequency (fh), working capital loan was proper to UKM with highly significant effect with chi square = 26,72, and easy access to bank influenced the distribution of working capital loan to UKM with highly significant effect with chi square = 25,48. There were constraint in distribution of working capital loan which was also highly significant with chi square = 28,55. The results of total and internal strategic factor score and strategic factor score of external with total score of IFAS = 2,55 and EFAS = 2,30 by matrix of IE indicates that BNI resides in condition of growth or of stability. The result of SWOT analysis, showed that there were alternative strategies to improve BNI performances, including : opening more center of SMEs credit (SKC) in and outside Java, cooperation with local government and upgrading services 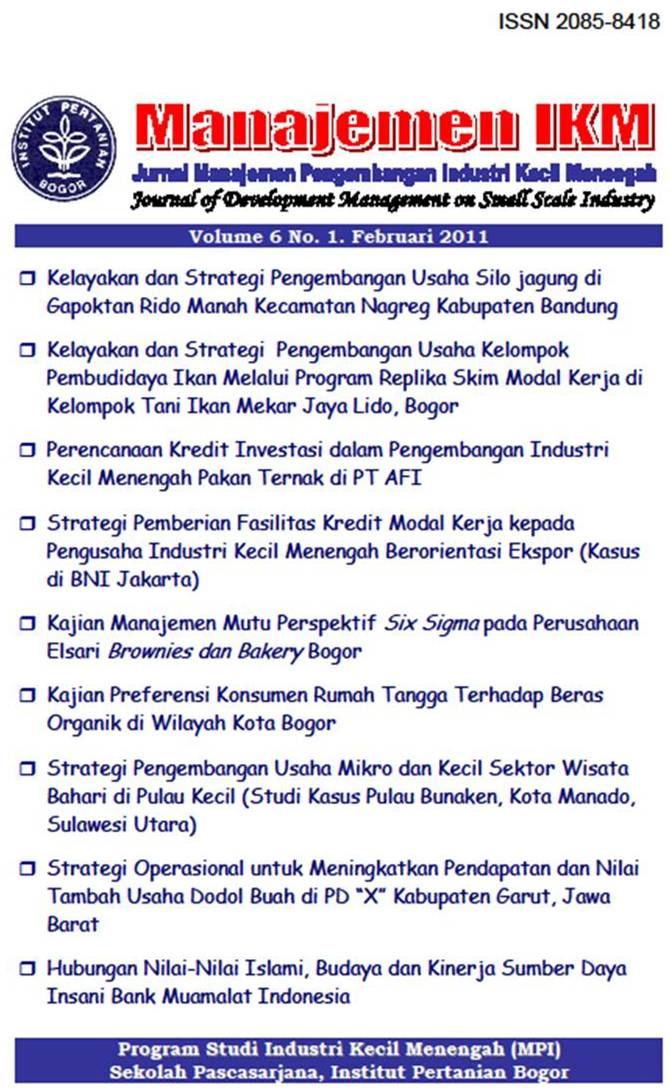