Research of physical oceanographic conditions post-tsunami was carried out and subsequently compared with the pre-tsunami 1998. Measurement of suhu, salinity and light transmission was conducted by CTDSBE911pls Model. Results showed that the flow in the Straits of Malacca flowed into the northwest and turned back into the Strait of Bengal and the next rotation into the flow of waters along the west coast of Nangro Aceh Darusalam (NAD). The mainstream off coast NAD in the Indian Ocean flowed to the northwest. Upper thermocline layer (17 m to 50 m) moved upward in 2005 and 2006 compared with previous data 1998 (90 m to 125 m). The moving upward thermocline in 2006 was allegedly due to the influence of Indian Ocean Dipole (IOD) positive. This requires further verification through long-term data collection to determine the monthly and annual variations, which will be compared with previous research. Light transmission (Tx) in 2005 from the surface to near the bottom (water column) was found lower than the year 1998 and 2006. This result was allegedly caused by resuspension from the seabed by energy turbulent produced by the tsunami. Heat content between 5 to 65 m depth in 2005 was higher than in 1998 and 2006. The higher heat content during the year of 2005 (post tsunami) was caused by friction due to the influence of tsunami energy, which predominantly found in the mixed layer depth. Type of water masses in the study area was a mixing between the local water mass, Malacca Strait Water (MSA), Bay of Bengal Water (BBW) under the influence of Arab Waters (AW), and the Indian Deep Water (IDW). 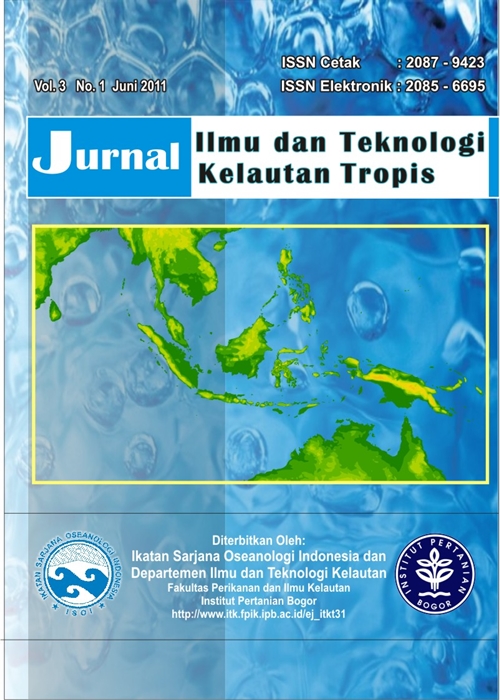