Cendrawasih Bay is habitat for olive ridley (Lepidochelys olivacea) which is directly adjacent to the Pacific Ocean. The presence and the diversity of L. olivacea in Cendrawasih Bay has been threatened. Genetics can be the key to conservation because they play an important role in maintaining population and recovering from damage. This study aims to determine the genetic diversity of L. olivacea and its association to the current pattern in the waters of Cendrawasih Bay. Samples of L. olivacea (n=20) were collected in Kwatisore (n=8) and Yapen Island (n=12) in Cendrawasih Bay waters from August 2015 to December 2016. The molecular analysis was based on 791-bp fragment of D-Loop on the non-coding region gen. The current pattern analysis was performed through INDESO data and visualized by using Ferret software. Phylogenetic analysis showed that 2 groups of L. olivacea from a total of 2 haplotypes, whose population from Kwatisore was dispersed in two haplotypes, while the population from Yapen Island was only dispersed in one haplotype. Populations from Kwatisore showed higher variations than populations from Yapen Island. The current pattern analysis suggests that the two study sites, Kwatisore and Yapen islands are different. Both populations are only connected by the Northwest monsoon currents period that indicates a little geneflow between this populations. Thus causing differences variation between Kwatisore and Yapen Island populations genetically. 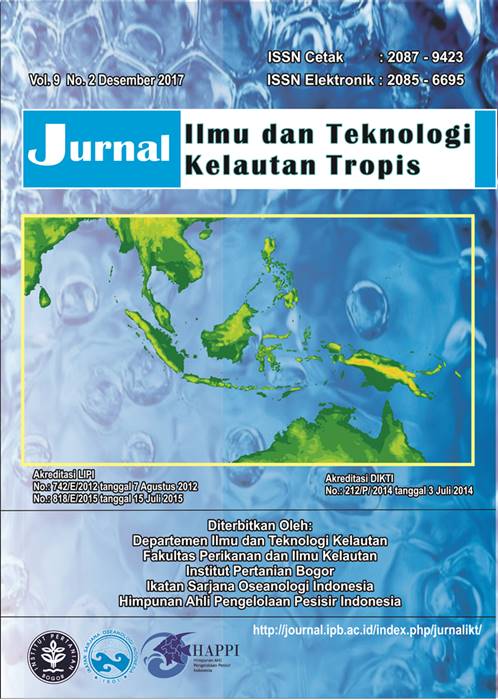