Sorghum has a growing popularity for food, feed, biofuel, and therefore needs to be developed. The research aimed to compare the effectiveness of pedigree and modified bulk selection methods for improving yield in three sorghum populations. The genetic materials used were 60 F6 lines from three populations, namely PI 10-90-A x Numbu, PI 150-20-A x Numbu and PI 150-20-A x Kawali which had been selected using pedigree and modified bulk methods. The experiment was conducted from October 2018 to February 2019 at the Cikabayan Experimental Station of IPB University, Dramaga, Bogor. The experiment was arranged in an augmented design with six checks, namely Kawali, Numbu, PI 10-90-A, PI 150-20-A, Samurai 1, and Samurai 2 which were replicated four times. Observations were made on agronomic traits and yield. Plant height and grain weight per panicle had high heritability and large genotypic coefficients of variation. The contrast test results showed significant differences between populations in plant height, panicle length, days of harvesting and 100-seed weight. On the other hand, no significant difference was observed among selection methods, indicating that both methods were equally effective for increasing sorghum yield. The pedigree selection and modified bulk selection increased grain yield per panicle by 14.1 g and 18.2 g respectively. Bulk of the best genotypes in early generation could be an alternative of bulk selection method. 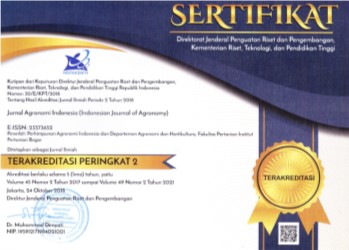