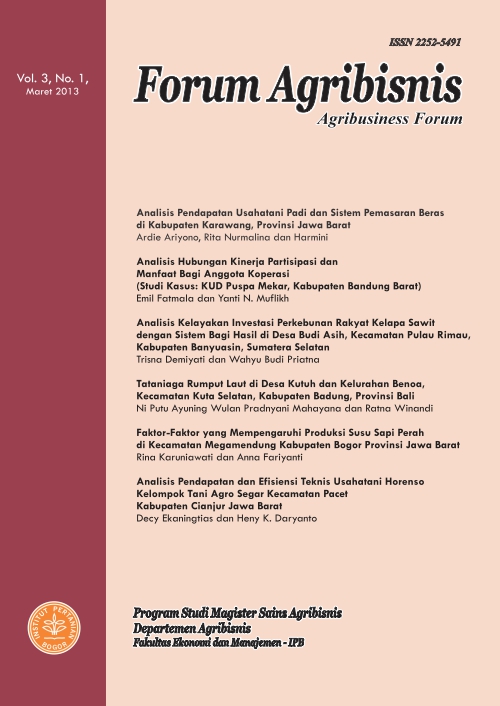 The objectives of this research were to analyses the rice farming income and the rice marketing system in Karawang district. Primary data were collected in this research involved  34 paddy farmers in Karawang and 12 rice traders and secondary data that is relevant to the research were collected.  The analysis of rice farming was conducted for the first growing season of 2011. Most of rice farmers are the selfowner with an area of ​​between 1 to 5 acres. The selling price of unhusked rice crop received by farmers ranged between Rp 2.200,00 to Rp 3.800,00 with an average of Rp 2.720,54. Value of R / C ratio is 1.50 based on total cost. The actors in rice marketing are paddy farmers, local rice mill, sub-district’s and Cipinang’s market wholesaler and retailer.   The biggest margin obtained by the local rice mill.  The biggest farmer’s share found at the market flows from farmer à sub-district wholesaler à Karawang retailer.  The biggest benefit cost ratio of marketing found at market flow from farmers à local rice mill à Cipinang wholesaler à Jabodetabek’s retailer.  The market structure at farmer level is nearly perfect, however at the other level (rice mill, wholesaler and retailer) the market structure is oligopoly and oligopsony.  The selling price of grain has a significant impact on farmers' income, so the role of the Government is expected to overcome this, such as by optimizing the role of the “Lumbung Desa Modern” (LDM), which is the existence still not optimal yet.

The author submitting the manuscript must understand and agree that the copyright of the article manuscript must be submitted/transferred to the Journal Forum Agribisnis. This work is licensed under the Creative Commons Attribution-ShareAlike 4.0 (CC BY-SA) International License in which the Author and Reader can copy and redistribute the material in any media or format, and remix, modify and build material for any purpose, but they must provide appropriate credit (citing articles or content), provide a link to the license, and indicate whether there is a change. If you mix, change, or create material, you must distribute your contribution under the same license as the original.