The Use of Reflective Mulch in Soybean-Oil Palm Intercropping System 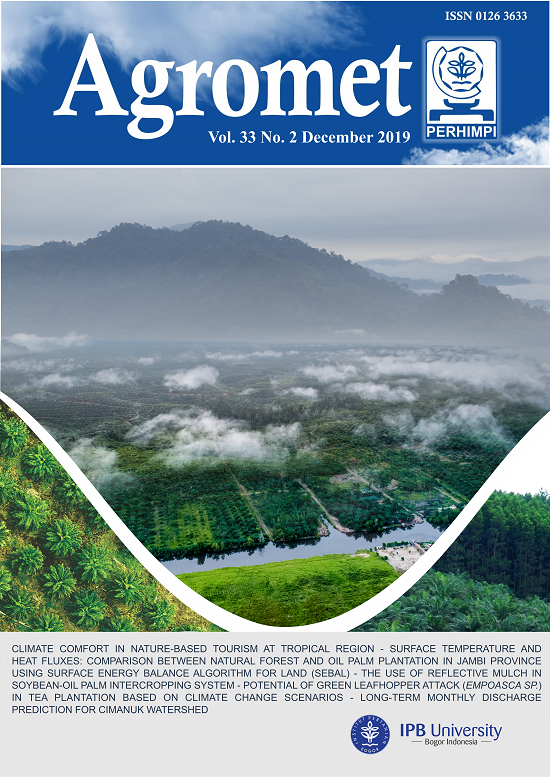 Demand for soybean is increasing nowadays as it provides a high nutrition food at affordable price. To fulfill the demand, an intercropping system of soybean-oil palm may increase the production of soybean. However, shading by the oil palm canopy would reduce the amount of radiation reaching the soil surface. Theoritically, application of reflective mulches may increase the amount of solar radiation intercepted by the shaded plants, hence it gives a positive effect for plant growth. The study aimed to analyze the effect of an increased radiation transmission with reflective mulch on the growth and development of soybean under an intercropping system with 4-year olds oil palm. The experiments were carried out on PT. Perkebunan Nusantara VIII located in Cimarga District, Lebak Regency, from March to June 2018. There were three treatments based on mulch application, namely soil without mulch (R0), soil with black silver plastic mulch (R1), and soil with dry palm oil leaf mulch (R2). The results showed that a canopy of 4-year-olds oil palm transmitted around 42% of an incoming radiation. The use of mulch as radiation reflector has a positive effect on an increased interception of solar radiation and potential productivity. Under R1 and R2 treatments, intercepted radiation was 25% and 15% larger than that of R0. In addition, mulch increased radiation use efficiency (RUE) by 2.3 times under R1 (1.6 g/MJ) and 1.7 times under R2 (1.2 g/MJ). The potency of productivity also increased (1.48 and 1.42 times higher under R1 and R2, respectively). The finding confirmed that mulch application did not affect the plant development in any treatment. Furthermore, we suggest that an intercropping system of soybean and 4-year-olds oil palm may be applied to increase the soybean production in Indonesia.