Common Ponyfish is one of demersal fish have an important economic value and is one of dominant catch in SundaStrait landed at Costal Fishing Port (PPP) Labuan, Banten. Common ponyfish fish caught with boat seine, danish seine, beach net, purse seine, rampus net, and bamboo platform liftnet. The purpose of this study was to analyze dynamic of common ponyyfish (Leiognathus equulus) in Sunda Strait. The research was conducted from April to August 2015 in PPP Labuan, Banten. Data taken in this study of biological data such as measurements of total length and height of the fish, weight, and gender. Total fish taken during this research reaching 1895 tail. The results showed that the growth coefficient (K) females and males respectively 0.47/year-1 and 0.79/year-1 with asymptotic length (L∞) of 258 mm for females and 210 mm for male. Values were first captured length (Lc) female (145.57 mm) and male (142.92 mm) is greater than value of the first mature gonads (Lm), which is for female and males respectively 116.54 mm and 146.162 mm. The rate of exploitation reached the optimal level between 0.53-0.74. The rate of exploitation of common ponyfish has exceeded the optimum exploitation rate, thus might common pony fish in Sunda Strait has overexploited. 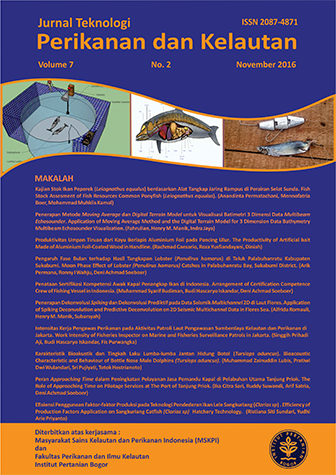