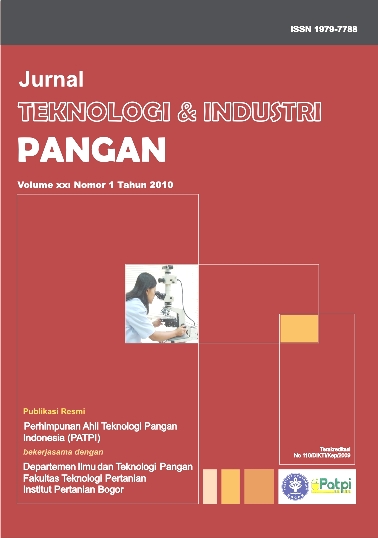 Sufu is a traditional Chinese fermented soybean curd (tofu) resembling a soft creamy cheese-type product. It is made by fungal solid-state fermentation of tofu (called pizi) followed by aging in saturated brine solution. The aims of this study were to obtain the best indigenous mold strain for sufu fermentation and produce a low salt sufu by applying Lactobacillus plantarum kik. Four indigenous mold strains were used i.e Rhizopus oligosporus, R. oryzae, Mucor hiemalis and Actinomucor elegans during pizi fermentation. The salt concentrations used in brine fermentation varied in the range of 6% - 12%. The results showed that the fermentation time of pizi depended on the mold species. Based on the density of the mycelium  and the spores colour, pizi fermented by R. oligosporus and R. oryzae were produced after 24 hours of fermentation, while those with M. hiemalis and A. elegans were formed after 36 hours at room temperature and 55-68% relative humidity (RH). Sensory evaluation of the pizi flavor indicated that the pizi fermented by A. elegans and R. oligosporus were ranked as first and second, respectively. Sensory evaluation (Balance Incomplete Block Rating Design) on the hedonic rating of sufu revealed that fermentation in 9% brine by Lactobacillus plantarum kik produced the most preferred sufu according to the panelists. Combination of L. plantarum kik and pasteurization of sufu could maintain the quality for three weeks.