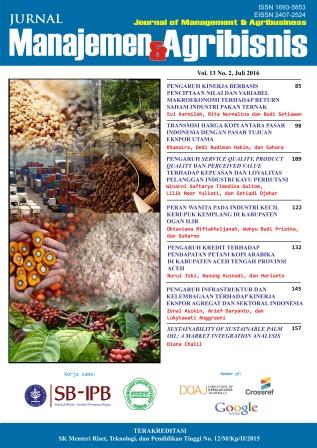 Crude Palm Oil (CPO) is the biggest consumed vegetable oil in the world. The increase in CPO production raises concern on the environmental impact even outside the producing countries. As a response to this matter, the EU has made a requirement to only import certified CPO (CSPO). India and China, the two biggest importers in the world, are less restrictive to the environmental issues, and their demands are more influenced by CPO price levels. These countries are the main export markets for Indonesia and Malaysia, the two biggest CPO exporters in the world. This research using monthly price data from the Netherlands, Germany, Italy, EU28, India, China, Indonesia and Malaysia. Market integrations are tested with Cointegration Test, Vector Error Correction Model and Seemingly Unrelated Regression. The results show that these markets are integrated, but European countries are unlikely to lead the price movement. Therefore, the concern on sustainable certification from the European countries still slowly spreads to other main importers, resulting in low absorption of CSPO.