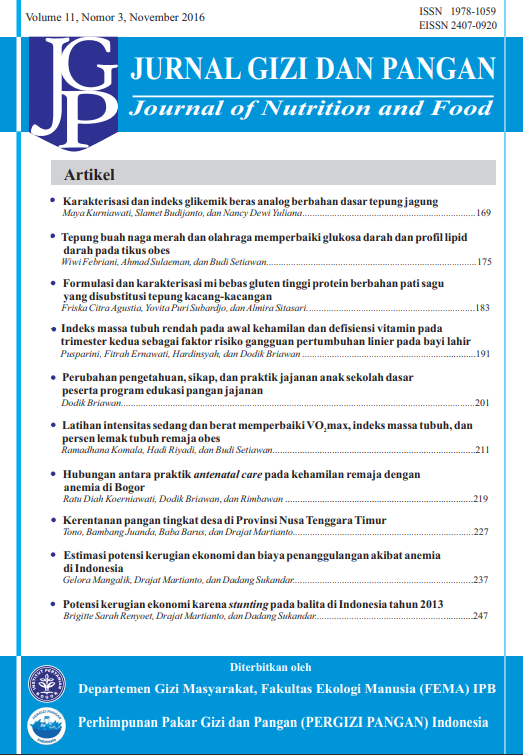 The objective of this study was to analyze the effects of moderate and high exercise intensity on VO2max, body mass index (BMI), and percent of body fat in obese adolescents. Thirty obese adolescents were randomly assigned to control, moderate intensity training (MIT), and high intensity interval training (HIIT) groups. The MIT and HIIT groups exercised by using treadmill for 40 minutes, three times per week during six weeks of intervention. Exercise on the subject of MIT and HIIT groups began with a five minute warm up by running on treadmill at 50-55% HRmax. After warming up, the MIT group ran for 30 minutes at 65-70% HRmax. Meanwhile, HIIT group should run for two minutes at 90-95% HRmax with one minute active recovery at 55% HRmax between each interval for a total of 30 minutes. Exercise ended with five minutes of cooling down at 50-55% HRmax. The results showed that HIIT group significantly had higher VO2max than MIT group (p<0.05). A signification reduction in body mass index and percent of body fat was observed for MIT and HIIT groups in comparison to the control group after the intervention (p<0.05). In conclusion, HIIT over six weeks increased VO2max higher than MIT. HIIT and MIT are equally effective in reducing BMI and percent of body fat in obese adolescents.