Root lesion nematode (Pratylenchus brachyurus) is one of the most important pathogens of patchouli that caused significant losses. Studies on the potential of endophytic bacterial to control P. brachyurus on patchouli had been conducted. To evaluate the effectiveness of endophytic bacterial against to P. brachyurus on patchouli, nine isolates of bacteria ( NJ2, NJ25, NJ41, NJ46, NJ57, NA22, ERB21, ES32, and E26) were applied by deeping root seedling into bacterial suspension. A study of the physiological characteristics of nine isolates was conducted by using specific medium. The results showed that endophytic bacterial was significantly reduced the population of P. brachyurus and all isolates bacterial promoted growth of patchouli (shoot weight, root weight, and root length). Four isolates, i.e. Bacillus NJ46, Bacillus Na22, Bacillus NJ2, and Bacillus NJ57 were among the potential control agents that reduced nematode populations as much as 68.1-73.9%. Almost all of the isolated bacteria from patchouli roots were able to solubilizing phosphate, while some of them had the ability to produce chitinase, cellulase, protease, HCN, and fluorescency. 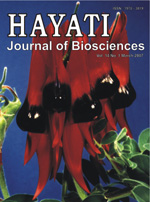