Substrate concentration is an important factor that influences the effectiveness of starch convertion to cyclodextrin by CGTase activity. The aims of this research were to produce maximum cyclodextrin at a high concentration of substrate and to compare cyclodextrin production at an acceptor minimal process by using ethanol and water at a various substrate concentration. This research was conducted by liquefy tapioca until reaching hydrolysis degree (HD) of 5 %. The hydolysate was then fractionated its acceptor by using water and ethanol 65 %. The best result obtained was determinated by statistical method, i.e. analysis of varians (anova). If there was a difference Duncan test was then used. The results were then used as substrate by suspending into phosphate buffer pH 6.0 (0.2 M). It was added CGTase into the substrate and processed at a temperature of 60?C for 260 minutes. The results showed that the tapioca hydrolysate substrate at HD of 5 % with a minimum acceptor at concentration of 10 – 35 % could produce cyclodextrin with relative stable of conversion degree (65.73 – 67.49 %). In the minimum acceptor process by using ethanol, the maximum amount of substrate that could be used was 30 % (w/v). It produced cyclodextrin of 206.78 ± 1.43 g/l and the conversion value was 68.93 %. On the other hand, the amount of substrate concentration that could be used up to 35% (w/v) by using water as a minimum acceptor. It produced cyclodextrin of 225.76 ± 4.0 g/l with convesion value of 64.50 %. 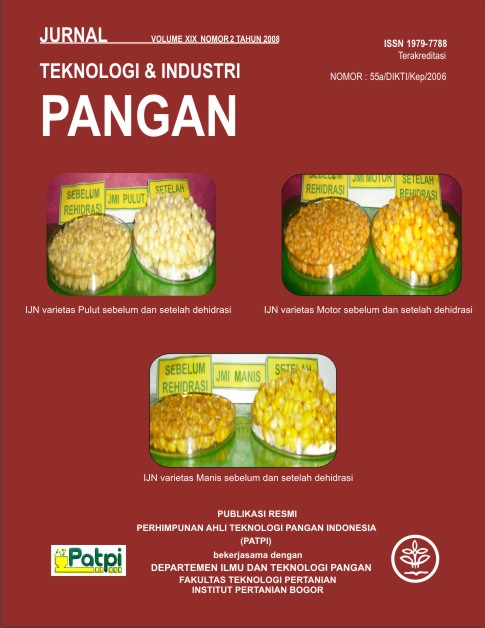