Malang City has colonial city character which is represented in spatial layout, buildings and landscapes. These characteristics are potential as historical objects as attempt to give knowledge to people about the history of Indonesia, particulary of
Malang City. Tourism activities also provides added value in preserving the historic landscape in the city. This study aims  to identify the elements of residential landscapes, parks and streets associated withthe colonial history in Malang City, and
analyze the potential of tourism attraction based on the socio-cultural and aesthetic value.

The study was conducted in several residential areas, parks and main streets of Malang City, ie: a) East-West lines, include: Alun-alun Tugu, Kahuripan Street, Semeru Street, Ijen Street and Ijen Parks; and b) North-South lines include: Suprapto Street, Basuki Rahmat Street, Alun-alun Merdeka, Alun-alun Merdeka Park, Kauman residential and Chinatown. Data analysis includes 3 (three) stages: 1) assessment of landscape in terms of socio-cultural aspects, 2) assessment of landscape
in terms of aesthetics using scenic beautyestimation method, 3) determination of tourism potential of the colonial history. Based on analysis of socio-cultural aspects, Ijen resident is the highest socio-culturalvalue and the lowest is Kahuripan Street.
While based on analysis of aesthetic aspect, the highest value is landscape of Alun-alun Tugu Park and the lowest is Chinatown. Based on the overlay of socio-cultural and aesthetic value, it is obtained that the Alun-alun Tugu Park has the highest value that can be the primary destinations in the development of Malang City colonial historical tourism. 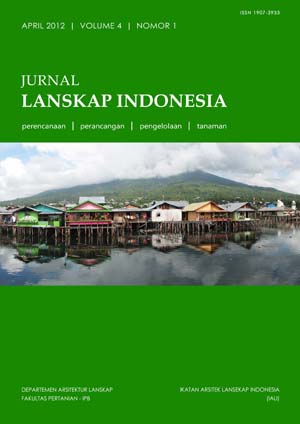