In recent years, issues on family welfare are being discussed. One aspect is concerning family welfare indicator and measurement. There are three measures of family welfare, i.e., BKKBN, BPS, and subjective measures. In general, this research was aimed to determine expenditure allocation and family welfare status, and to compare three measurements of welfare status. Cross sectional design and survey method were applied for this research. District of Medan Municipality, with Sudirejo I Sub District, Medan, North Sumatera were chosen purposively as study area. In this sub district 2 areas were chosen at random and 100 families were selected as samples and drawn using Proportional Stratified Random sampling method. Data of family demographic and socioeconomics characteristic, food and non food expenditure, and subjective perception of family welfare were collected for 2 months from Augusts to September 2003. Mann-Whitney test, Chi square, multiple regression, sensitivity and specificity, logistic regression was used to analyze data. The result indicates that the average of non food expenditure of the relatively wealthy family was six times higher than poor family. There was a significant difference of the proportion of food and non food expenditure between poor and wealthy family. Education and income influenced significantly family expenditure. Using BPS criteria as gold standard, the three poverty/welfare indicators (BKKBN, food expenditure and subjective perception) had high sensitivity as many as 100.0. BKKBN and food expenditure criteria were the highest specificity as many as 63.3% and the lowest was subjective perception criteria (22.4%). The welfare determinant based on BPS criteria was the education of family head. The welfare determinant based on BKKBN criteria was family income. The welfare determinant based on food expenditure was the number of family members and income. The welfare determinants based on subjective perception were the education of family head, the age of family head, the perception of price and income. The poverty threshold as much as Rp 230,000.00 based on food expenditure considered the best and was chosen because it could classify poor family more than BKKBN criteria, and the education of family head with less than 13 years (the same as Senior High School level) also represented poverty indicator. 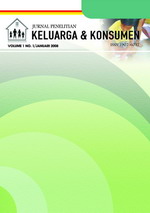