Sago palm (Metroxylon sagu Rottb.), grown mostly in the tropics, is one of the most productive carbohydrate-producing crops. However, it is still underutilized. Tissue culture of sago through somatic embryogenesis has been developed. The plantlets derived from somatic embryos, however, are usually weak with few leaves and roots and have low survival rates during acclimatization. Carbohydrate is commonly added into culture medium as an energy source and an osmotic agent. Research was conducted to determine a suitable carbohydrate for plantlets growth in order to produce vigorous plantlets of sago. The basal medium used was a modified MS medium with a half-strength of salts. Different types of carbohydrate (sucrose, maltose, glucose, and fructose) at various concentrations (30, 45, and 60 g/l) were added into the medium. A single 2 cm plantlet derived from somatic embryo was cultured on a culture tube. Each treatment consisted of 15 plantlets. The cultures were incubated in a culture room with light intensity at 20 mmol/m2/s and temperature at 26 oC. The results show that different types and concentrations of carbohydrate influenced the growth of sago plantlets significantly, but there was no interaction between the two factors. Sucrose was better than other types of carbohydrate, and the concentration of 30 g/l was better than concentrations of 45 or 60 g/l for the growth and vigor of sago plantlets. Medium with a sucrose level at 30 g/l gave the best performance of sago plantlets based on plantlet height, leaf number, biomass fresh weight, stem diameter, and rooting percentage. 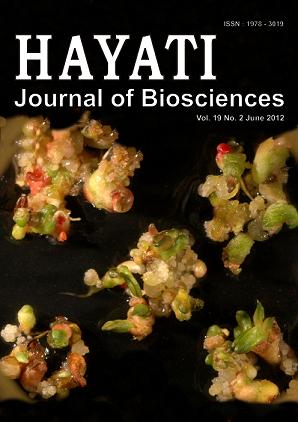