Aluminum (Al) toxicity is the major limiting factor of plant growth and production in acid soils. The target of Al toxicity is the root tip, which affects mainly on root growth inhibition. The aim of this research was to study the uptake and distribution of Al in root apices of two rice varieties IR64 (Al-sensitive) and Krowal (Al-tolerant), which were grown on nutrient solution containing 0, 15, 30, 45, and 60 ppm of Al. The root growth was significantly inhibited in both rice varieties at as low as 15 ppm Al concentration. The adventive roots of both varieties showed stunted growth in respons to Al stress. There was no difference in root growth inhibition between both rice varieties as well as among Al concentrations. Al uptake on root apices was qualitatively and quantitatively analyzed. Histochemical staining of roots using hematoxylin showed dark purple color on 1 mm region of Al-treated root apices. Rice var. IR 64 tended to take up more Al in root tip than Krowal did. However, there was no statistically significant difference (p = 0.176) in root Al content of both varieties in response to different concentration and period of Al treatments. Al distribution in root apices was found in the epidermal and subepidermal region in both rice varieties. Based on those results, rice var. Krowal that was previously grouped as Al-tolerant variety has similar root growth and physiological response to Al stress as compared to Al-sensitive variety IR64. 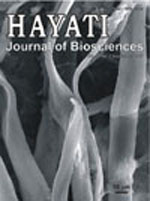