Photosynthetic gas exchange in response to increased carbon dioxide concentration ([CO2]) and drought stress of two C3 (wheat and kale) and two C4 species (Echinochloa crusgallii and Amaranthus caudatus) were analysed. Plants were grown in controlled growth chambers with ambient (350 mol mol-1) and doubled ambient [CO2]. Drought was given by withholding water until the plants severely wilted, whereas the control plants were watered daily. Even though stomatal conductance (Gs) of C4 species either under ambient or double [CO2] was lower than those in C3, doubled [CO2] decreased Gs of all species under well watered conditions. As a result, the plants grown under doubled [CO2] transpired less water than those grown under ambient [CO2]. Photosynthesis (Pn) of the C4 species was sustained during moderate drought when those of the C3 species decreased significantly. Doubled [CO2] increased photosynthesis of C3 but not of C4 species. Increased [CO2] was only able to delay Pn reduction of all species due to the drought, but not remove it completely. The positive effects of increased [CO2] during moderate drought and the disappearance of it under severe drought suggesting that metabolic effect may limit photosynthesis under severe drought. 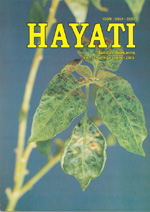