The objectives of this experiments were to determine the effects of drought stress initiated at vegetative growth stage on yield of peanut, to evaluate the tolerance of six peanut cultivars against drought stress, and to determine their leaf prolin and total sugar content. One group of peanut plants were grown in plastic pots and subjected to stress condition during the period of 15-45 days (Experiment I) or 15-80 days (Experiment II) by watering them only in every 4-7 days and were harvested at days 75 (Experiment I) or at maturity (Experiment II). The other group was grown optimally in plastic pot up to harvest period. Leaf prolin content was determined at 12 (before stress), 30 (after three periods of stress), 47 (after six periods of stress), and 64 days in Experiment I and only after six periods of drought stress in Experiment II. Results indicated that drought stress that was initiated at vegetative growth stage reduced plant height, branches number, shoot and root dry weight, and peanut yield. Sensitivity index calculated based on peanut yield showed that peanut cv. Jerapah and Singa were a medium tolerance while Gajah, Kelinci, Macan, and Simpai were sensitive against drought stress. Higher increased in leaf proline content after drought stress was observed in peanut cv. Jerapah and Singa, while less increased was observed in peanut cv. Gajah, Kelinci, Macan and Simpai. Total leaf sugar content of peanut cv. Jerapah, Gajah, Macan and Simpai decreased under drought stress while that of Singa and Kelinci were the same as that under optimal condition. The ability to increase leaf proline content and maintain total leaf sugar content under drought stress could be used as indicators of drought tolerance in peanut cultivars. 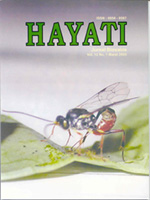 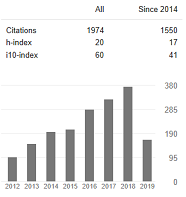