Viability of Beauveria bassiana is extremely low due to toxic compounds in soils. This research was aimed to study the effect of four groups of media on viability of B. bassiana Bb-Pb2. The first group was leaf litters of onion, flowering white cabbage, cabbage, and chinese mustard, respectively; the second group was the soils containing decomposed residues of each plant of the first group; the third group was the mixtures of each media of both groups above (1:1), and the fourth group was natural top soil as a control. Each plastic bag filled with one kg of each medium was inoculated with ten ml of B. bassiana conidia (106/ml of concentration) and incubated in open area for 8 weeks. The results showed that all leaf litters of those plants and their compost soils affected the fungal viability. The highest decreasing number of colony was found on onionâ€™s leaf litters, soil containing of decomposed onion, and the mixtures of both media. The treated B. bassiana showed significant reducing abilities of growth, conidia production and conidia germination on PDA media, except the one of control. It is suggested that the Bb-Pb2 isolate might not be effective as bioinsecticide in the soils containing either those leaf litters or composts. 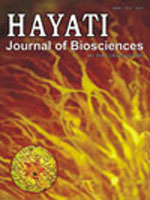