Kaempferiaparviflora (Zingiberaceae family) has a potency to be developed for a new medicinal plants in Indonesia. One of problems in its cultivation is the lack of planting material availability due to the long dormant period. The objectives of this research were to study the effect of various concentrations of BAP and ethephon, and also the effect of the prior growing condition to the dormancy breaking and shoot growth of K.parviflora rhizome. Two separate experiments were applied for two lots of rhizomes namely Cikabayan and Pasir Sarongge lots. Each experiment was arranged in completely random design with 2 factors. Experiment-1 used 4 concentrations of BAP (0, 50, 100, and 150 ppm) as the first factor. While, experiment-2 used 5 concentrations of ethephon (0, 200, 400, 600 and 800 ppm) as the first factor. The second factor in both experiments were prior shade condition at 55% artificial shading and natural shading. A rhizome without soaked application (control) and a rhizome with soaked by aquadestilata without PGRs (0 ppm) were used as compared items. Data was analyzed with ANOVA. Combined Analysis of Variance and t-test were performed in order to compare between 2 lots. Result showed that concentration of BAP until 150 ppm and concentration of ethephon until 800 ppm were not effective to stimulate bud induction time. Meanwhile, rhizome from 55% artificial shading had a shorter periode of dormancy than the natural shading. In the addition, plants from Pasir Sarongge rhizomes lot had more plant number, plant height, leaf number, leaf length, and leaf width than Cikabayan rhizomes lot. 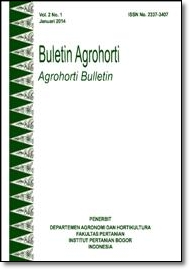 THIS JOURNAL INDEXED BY